Betsy is a fighter.  But she doesn’t fight with other dogs.  She was supposed to, but she refused, and her skin was left in tatters.  However, that hasn’t stopped her from being the happiest, most loving dog possible.  Seeing her now shows just how much of an incredible survivor she is.

Her photos are hard to look at, her video nearly impossible to watch.  The constant fear and pain she endured must have been agonizing.  But she is not living in the past – she has moved on to a new life with thousands of supporters.. 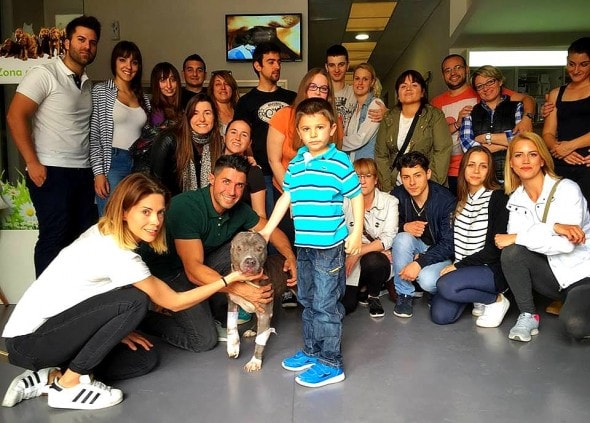 Pit bulls and about three dozen other breeds were banned in many parts of Germany after a rash of attacks.  One of these deadly attacks was on a schoolboy by an unleashed pit bull who had been trained to fight by a man who had been previously convicted on numerous counts of robbery and dog fighting.

But now Germany is reconsidering their position on what they consider to be dangerous because of Betsy.  Intelligent people know to “punish the deed, not the breed.”  Pit bulls are not inherently aggressive.  Yes, they can be very strong and destructive, as any large breed can be, and any dog who is not trained well or is purposely trained to fight can be a menace.  But most dogs are not born with the desire to harm people.

Betsy is a testament to just how wonderful any dog is meant to be, even in spite of her horrific treatment.  She was forced to fight, and she refused.  Because of this she suffered even worse injuries than she might have had she tried to defend herself.

She was rescued six weeks ago, and she is still recovering in an animal hospital. She is a staff favorite, delighting them as she happily comes bounding into the room to see them.  Betsy is full of smiles, and her tail wags incessantly.  Pain notwithstanding, this is probably the most joy she has ever experienced. 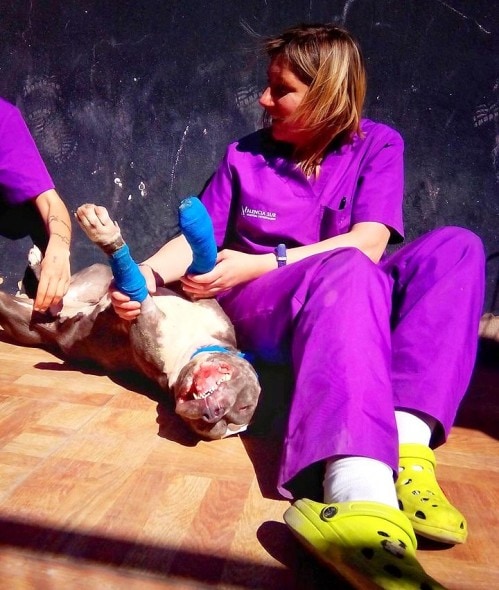 Knowing her story is heartbreaking, but knowing there are survivors like her gives us all hope that through awareness and rational legislation, dogs like Betsy will be better protected and in the right homes.

Let’s Adopt International (Viktor Larkhill) saves animals in the worst conditions, but they can’t do it without your help.  If you would like to make sure they are able to save more animals like Betsy, please CLICK HERE.