This sweet Boston terrier puppy has managed to steal the hearts of his doctors and fans internationally. He even has a law named after him in the works that, if passed, would strengthen Pennsylvania’s animal cruelty laws. 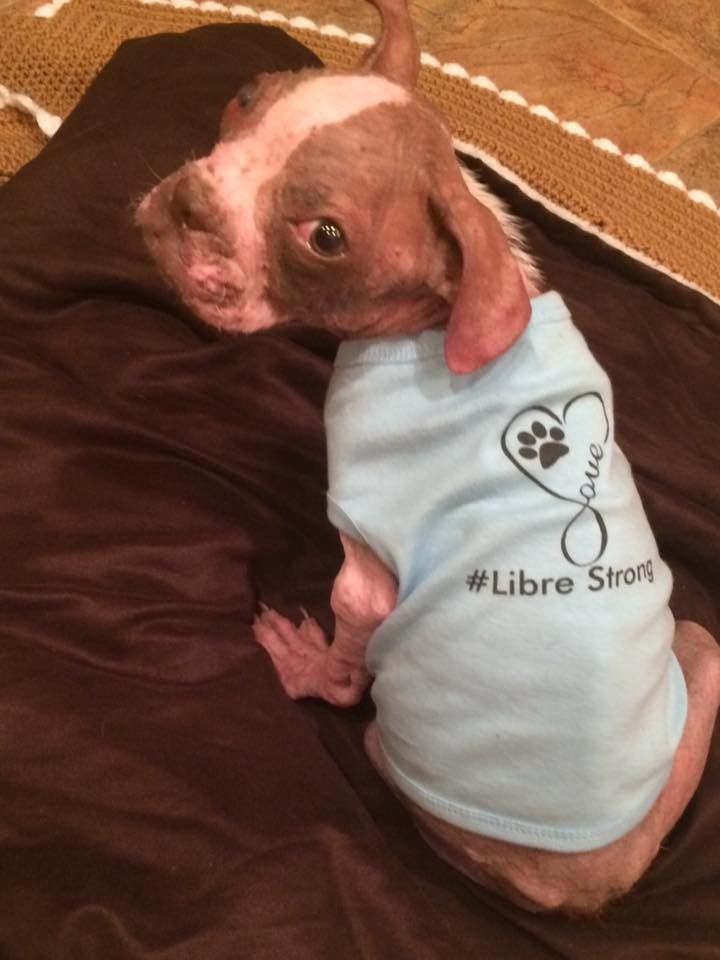 DILLSBURG VETERINARY CENTERHe’s also carved a special place into the heart of the one woman who never once gave up on him. 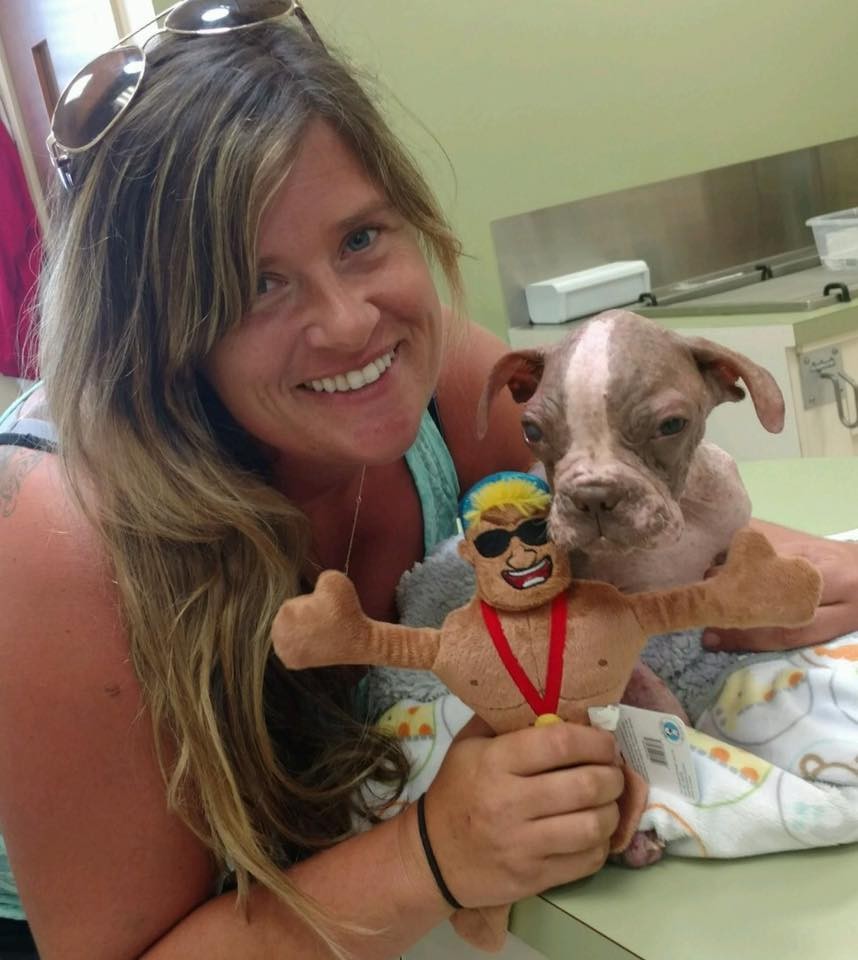 Libre with Janine Guido, his rescuer and new momDILLSBURG VETERINARY CENTERWhen Libre first came into the care of Pennsylvania’s Speranza Animal Rescue, there wasn’t much hope for him. He was emaciated and suffered from an extreme case of mange, a skin disease that left him hairless, and was made worse by infections and maggots that had burrowed into his flesh. 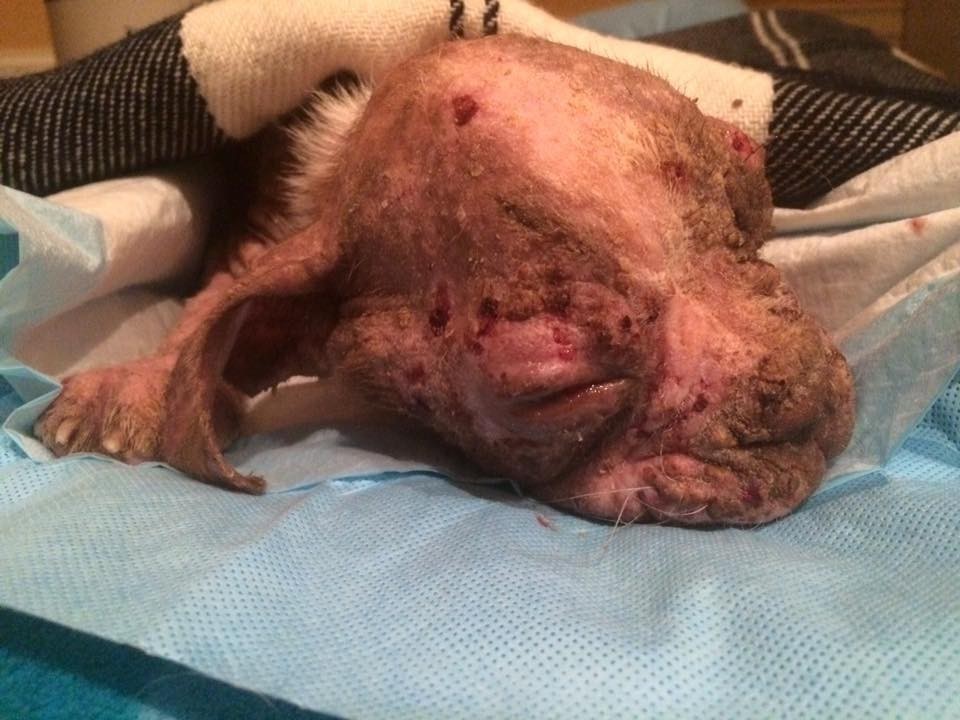 Libre from when he was first rescuedDILLSBURG VETERINARY CENTERYet, Janine Guido, founder of the rescue, saw something in little Libre that his initial vets, who suggested euthanizing him, did not — a dog who wanted to live. So she gave him that chance. 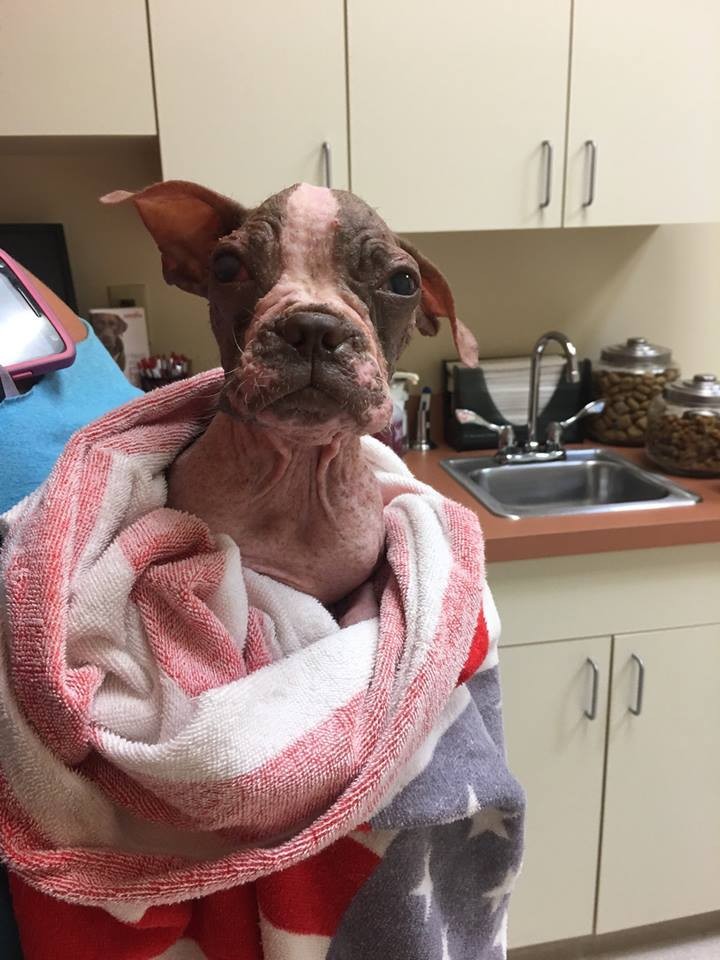 LIBRE, THE BUG-EYED MIRACLE“We’ve seen really bad cases of abuse,” Guido told The Dodo. “But Libre from the get-go stole my heart. Each day with him was touch-and-go.” She added that even her boyfriend said he had never seen her so upset over a dog — Guido had cried for weeks worrying about him, simply hoping that he would pull through.

After he was rescued, Libre was transferred to the Dillsburg Veterinary Center, which often partners with Speranza Animal Rescue, to start his journey toward healing. For the first few weeks, Libre was depressed and his condition was unstable. 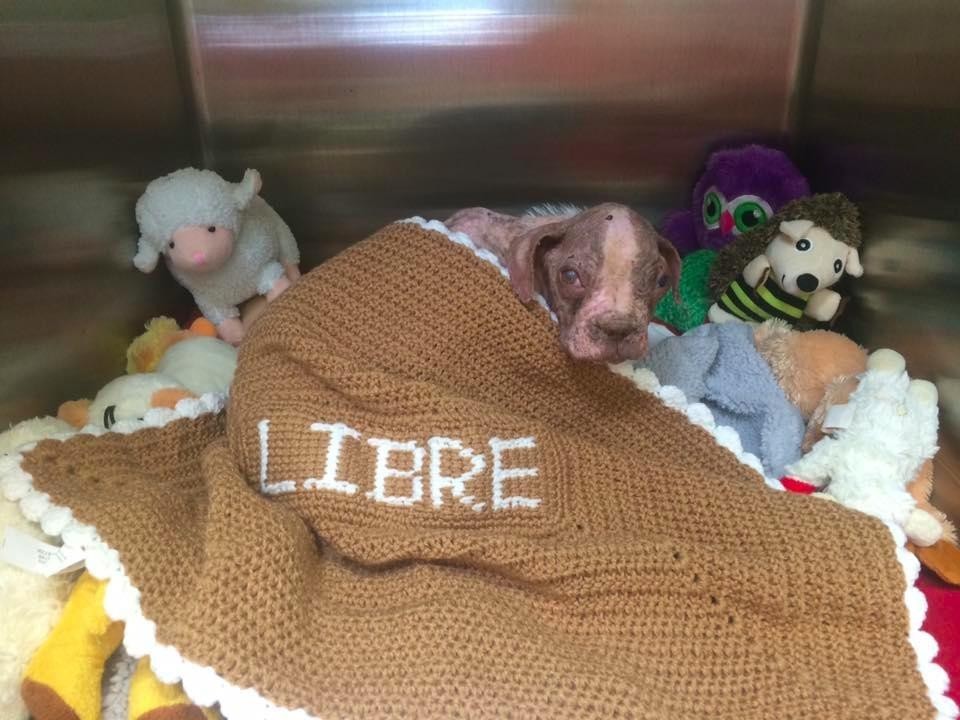 DILLSBURG VETERINARY CENTERThe puppy couldn’t even stand — but day by day, Libre continued surprise his caretakers with his incredible progress. He went from a being a dog whose spirit was seemingly broken, to a survivor who beat the odds and now loves to take walks in the the sun and give kisses to his new mom …

… showing off more of his feisty, playful attitude toward her each day. 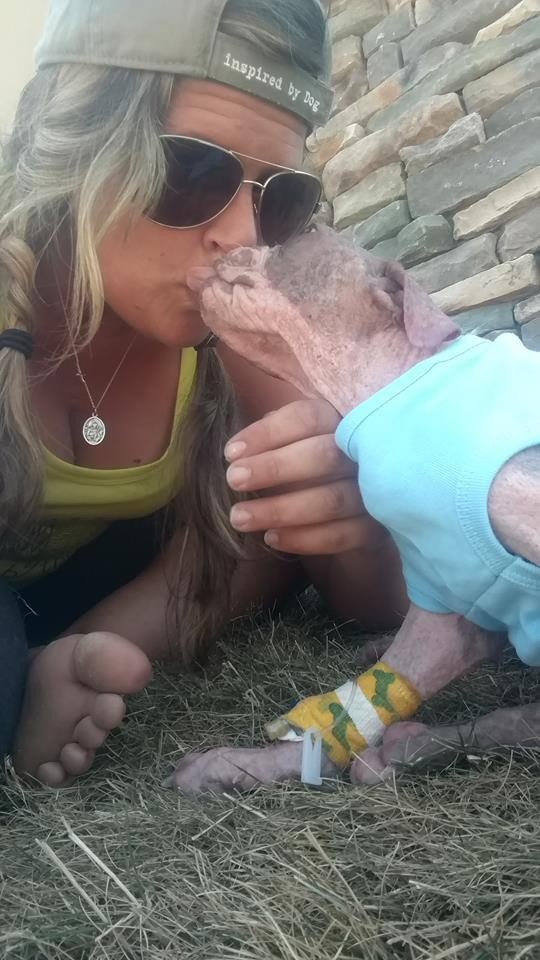 LIBRE, THE BUG EYED MIRACLEGuido, who fell in love with Libre after saving his life, decided to officially give him a home as well. Guido currently owns seven dogs, in addition to a few fosters, so Libre’s all set to join one very big family soon. 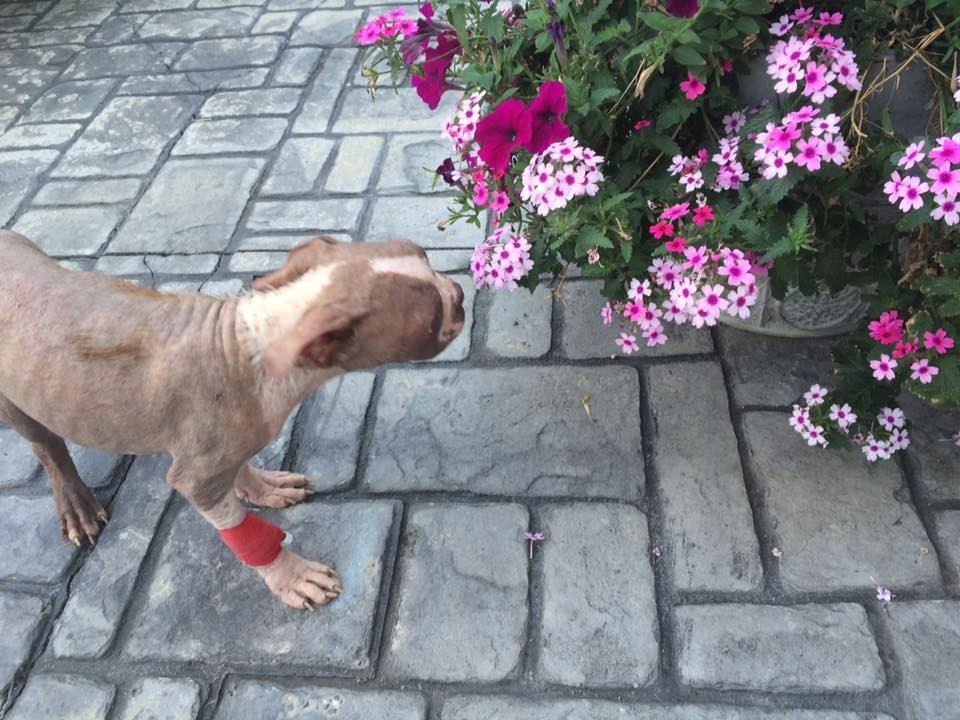 DILLSBURG VETERINARY CENTER“He’ll be in heaven, he really likes other dogs,” she said.

If all goes well with the last round of his IV antibiotics, Guido said, Libre is expected to come home for the first time on Friday.

“I feel different about him,” Guido said. “We definitely formed a bond. He’s like this little naked, hairless baby and you can’t help but love him … We’re just so blessed to have him in our lives.”

You can keep up with Libre’s adventures on Facebook. 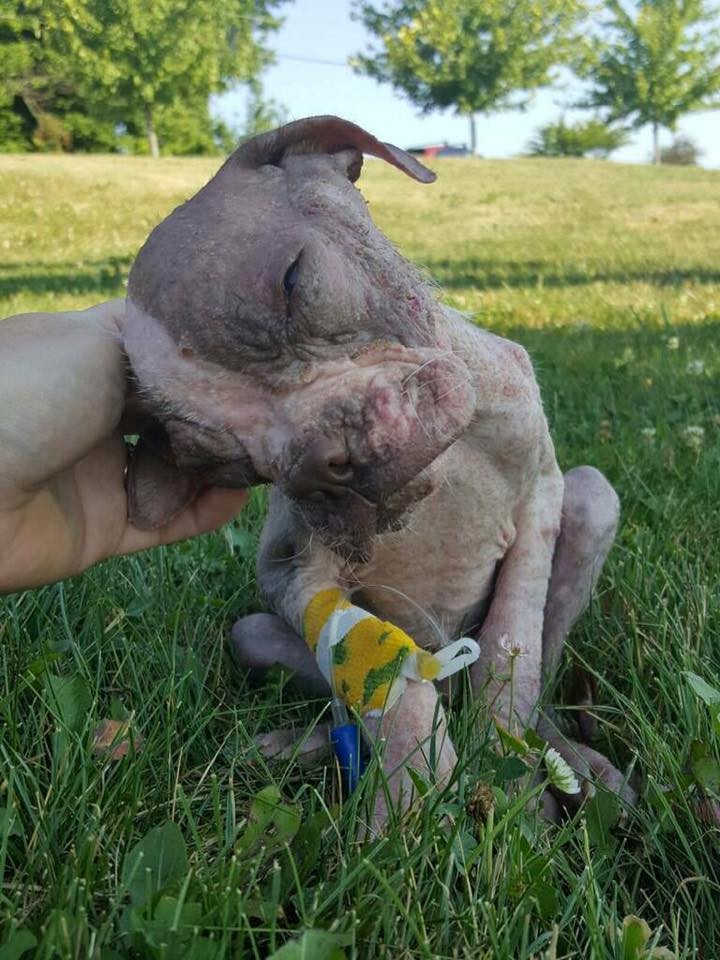 Watch this video showcasing just how far Libre’s come since his rescue: